Located north of Hangzhou, is known to many as the summer capital of Eurasia. But for a few brave warriors it is known for its secret arena located in the middle of the sea where the brave can fight incredible monsters to increase their strength by many folds. However only a few know its true location.

The only way to go to the arena is by boat. You'll need to get a ticket from Harambe the monkey in Wroclaw Fortress. A ticket costs 5 million golds and is good for 8 hours only.

Once you have a ticket you'll need to talk to Harambe to ride the boat. Click Go to Shangtu to travel there.

When you arrive. You'll have to talk to Gahee, she takes care of supplies and is one of the few persons left that knows the real location of the arena. But don't let her young appearance fool you, she is actually immortal and is thousands of years old. She is also quite greedy and will only reveal to you the location if you pay her 50 of your fame.

If you are willing to sacrifice your hard earned fame as payment then you can talk to her and click Join Battle to be teleported to the secret arena. 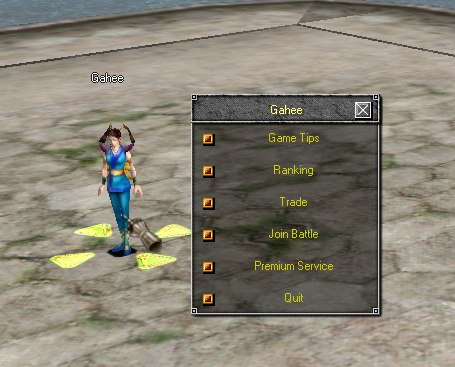 The arena is an abandoned ancient champion fighting grounds but it is now being used as a portal by Gaiser's minions. Not much is known about their arrival so its best to be prepared for battle all the time.

One thing is for certain though: death will cost you 1 fame.